One Disease You Never Have to Worry About - Thanks to Vaccines!

Have you guessed the disease yet? 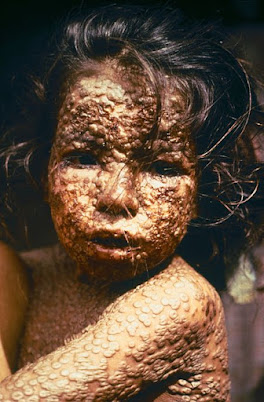 Smallpox is a disease caused by the variola virus (related to cowpox and chickenpox), that is mainly spread by airborne viruses which come into contact with mucosal membranes. The individual infected was usually most infectious while skin lesions were present. 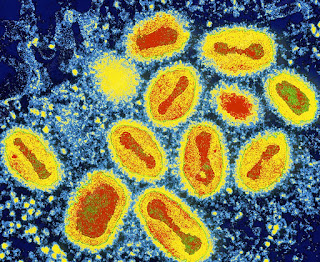 There were four routes that the disease could take:
So how come we don't see smallpox anymore? Because it is one of the only two disease in the world to be completely eradicated.

Vaccination efforts started in 1796 when the English doctor Edward Jenner noticed that milkmaids who had gotten cowpox had lower rates of contracting smallpox. Dr. Jenner guessed that exposure to cowpox could be used to protect against smallpox. To test his theory, Dr. Jenner took material from a cowpox sore on milkmaid Sarah Nelmes’ hand and inoculated it into the arm of James Phipps, the 9-year-old son of Jenner’s gardener. Months later, Jenner exposed Phipps several times to the variola virus, but he never developed symptoms.

In the 1950s, the WHO started a plan to eradicate this disease but, had a lack of funds, personnel, and commitment from countries, and a shortage of vaccine donations. Only wealthier regions like North America and Europe could afford mass production, storage, and distribution of this vaccine. Because of this, smallpox was eliminated in North America in 1952 and in Europe in 1953.

By 1967, Laboratories in many countries where smallpox occurred regularly were able to produce more, higher-quality freeze-dried vaccine.  The development of the bifurcated needle, the establishment of a case surveillance system, and mass vaccination campaigns helped further decrease the spread of this disease. These efforts made steady progress toward ridding the world of this disease, and by 1971 smallpox was eradicated from South America, followed by Asia (1975), and finally Africa (1977).

The 33rd World Health Assembly declared smallpox eradicated on May 8, 1980. Smallpox eradication is thought to be to be one of the the biggest public health achievement in history. And it couldn't have happened without the development of a vaccine.

The power of vaccines against debilitating, disfiguring, and fatal diseases (of which there still are many today) is evident from the fight against smallpox. Efforts to eradicate more diseases are constantly occurring but meet resistance from Anti-Vax movements. Parental and provider education, resource distribution, and free or low cost vaccinations might be able to counteract these type of movements and make diseases such as Measles, Rubella, and Malaria a thing of the past.